Scenic solidarity
Like many landmarks around the world, the Erasmusbridge in Rotterdam has been illuminated with the colours of the French flag.

image by AFP/Getty Images, via BBC

New York solidarity rally
A vigil in solidarity with France has been taking place in New York’s Washington Square Park.

image by Reuters, via BBC

image by AFP, via BBC

London vigil
People have gathered in Trafalgar Square to remember those who have lost their lives. image by Twitter Mario Cacciottolo (@m_cacciottolo), via BBC

Sporting silence
Officials and players from Denmark and Sweden have held a minute’s silence in the Swedish city of Solna ahead of the first leg of their Euro 2016 play-off. image by AFP/Getty Images, via BBC

White House backs up French IS claims
President Obama has held a meeting of his National Security Council before leaving for a summit in Turkey. At the briefing he was told there was “no information to contradict the initial French assessment of ISIL’s responsibility”, using an alternative acronym for Islamic State. image by AFP, via BBC.

Tel Aviv tribute
At a ceremony in Tel Aviv, Israelis are lighting candles for those killed in Paris.

image by Reuters, via BBC

Europe mourns
Candles are burning alongside flowers which are being laid out at embassies across Europe.

Kiev in Ukraine. image by AFP/Getty Images, via BBC

Warsaw in Poland. image by EPA, via BBC

U2 pay tribute
The Irish band U2 have paid their respects outside the venue where they were due be performing this evening. They have cancelled two performances in the French capital.

Landmarks illuminated.
Iconic sites around Europe are being lit up in the colours of the French flag.

The London Eye via bbc.com

The Brandenburg Gate in Berlin. via bbc.com 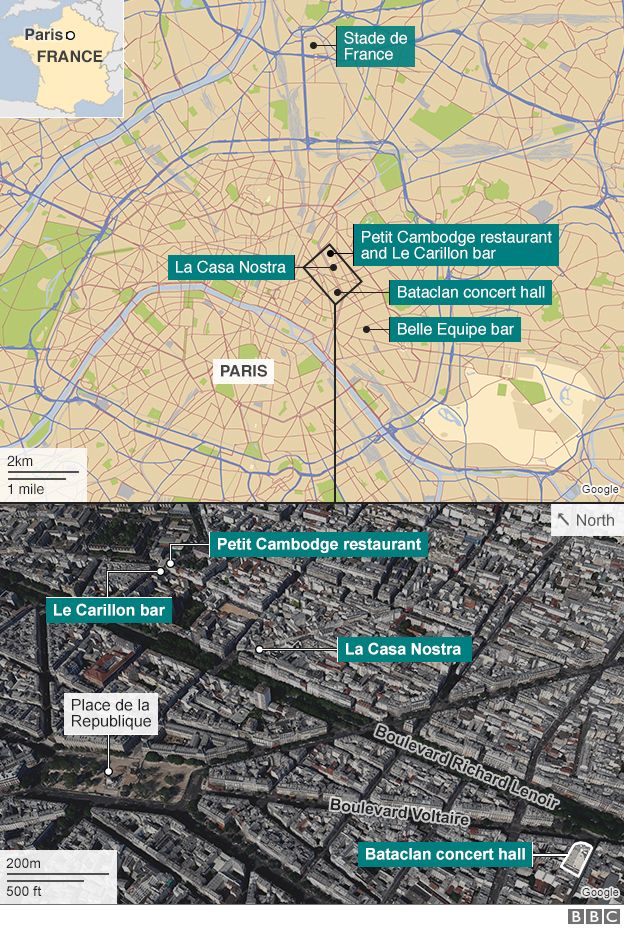 The attacks took place at six sites across Paris, mainly in the centre of the city. Image by Google, via BBC.com